Just recently I puffed up my chest after getting some encouragements from my better half and a really good friend at work, and got an iPad Pro 9.7.

I've always liked digital art, but never really got into it because of my firm belief that art shouldn't be expensive, and art can be created with the most primitive tool available. Pencil and paper are easy choice for me, since you can find pencils and paper almost everywhere.

But the on the trip back from Seattle, 2 rows in front of me, there was a teenage girl playing with her iPad. It's a usual sight while you're flying but she wasn't just playing angry bird or candy crush, or watch a movie like most people do, she was creating! In a mere 4 hour flight, she drew a human figure, and a face. From that distance I could see quite a bit of detail as well. And I thought, "That's really neat~!" I could achieve that much with mere pencil and paper, and on a plane too when the trays are usually pretty unstable, with poor lighting. With an iPad, I never have to worry about those.

So I got one as an early birthday+Christment present for myself. My wife got me the Apple Pencil which is by all means, not a a typical pencil, and it's not at all cheap.

My first attempt was a company logo requested by my buddy at work for his custom rifle shop. I sketched it with ProCreate, and vectorized it using Graphic. 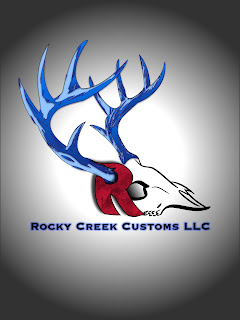 And my 2nd attempt was just off a video game which I play a lot. It's a Titan class character, Exo species, anticipating the new Rise of Iron expansion armor gear set. 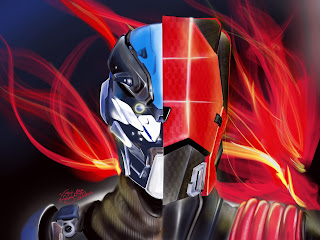 I must say, it's really fun drawing with iPad Pro. I do find that 9.7 could be a little small, and the 12.9" would be a lot more suitable for drawing full time. But I really like the portability of the 9.7 and it's not heavy at all. I drew both of the images above on my lap, sitting in my couch, while watching TV and listening to musics.

I will continue to experiment with this amazing little device, and hopefully I'll be able to create more from here onward.

Thanks again for visiting, and Happy Drawing!

A portrait I drew for Angela, a great mentor who has taught me what I needed to know about reliability compliance in the power industry, a gift to a really good friend.
Her mom passed away not too long ago, and I could only relate with the recent loss of my aunt in my family.
I didn't want to mail this to her, so I brought it with me to Seattle earlier this week attending a conference Angela and the compliance team organize every 2 years. I handed this drawing to her, tears started rolling. My eyes were wet too thinking about my TuaEe, and I know that this is probably one of the good ways to remember the loved ones that have left us. 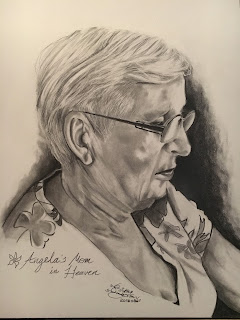 I already have a few more projects lined up, so stay tuned. As always, thanks for visiting and for all your lovely comments.
Posted by Alex at 8:10 AM 15 comments:

Tua Ee (大姨) is my mother's oldest sister. She took care of me and my siblings when we were little like her own. I had always enjoyed visiting her when I had the chance during school holidays, and talking to her over the phone was always a joy. I had lots of fun taking worry-free naps in her house, and fixing broken things around her house with just my Swiss army knife. I was often rewarded with a big smile, endless of compliments, and a full stomach.
She always cooked the best meals, baked the best cookies, and I was never complaining about have to finish up so that she didn't have to worry about leftovers.
I called her every year during Chinese New Year, and wished her that she'd be blessed with good health and happiness, and often times, we would be giggling over the phone.
This coming Chinese New Year however, I will no longer be hearing her voice, nor will I be able to make her laugh. She had left us in her sleep, peacefully and quietly. I am sad that I was not able to be at her funeral to tell her goodbye for the last time, and that she has a strong and permanent place in my heart, right next to my cousin Ping See, which I will always revisit. 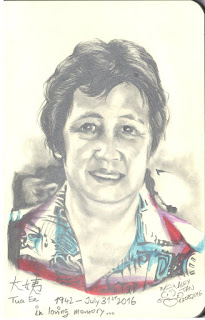 (Pencil on Moleskine Sketchbook 5.5x3.5")
Sorry I had not been drawing or posting. I will not promise anything, and I appreciate the thoughts and your time to read.
Posted by Alex at 2:59 PM 10 comments:

About a month ago, the daughter of my co-worker and friend of mine got involved in an accident. The road was dark and probably slippery too, and she crashed into a tree. People nearby managed to pull her out of the wreck. She's healing well, and doing better each day, and her injuries were mostly from lacerations, despite the front end of the vehicle was crumpled beyond recognition. She couldn't remember the whole thing, which is probably a blessing, but most of all... the car did what it was supposed to do, protect the driver. When I looked at the picture taken of the wreck, I couldn't imagine how one could have survived it. To me, "someone" was looking after her.

I was also just thinking if I was 16, and if me or my friend got in an accident like that, how would that affect me. Will I ever drive again? Will this be something I can tell my kids and grandkids one day? I don't really know. But one thing that I used to do when I was 16 is drawing greeting cards for friends(because I couldn't afford to buy them gifts, and hand drawn cards are always unique), so I did just that for her eventhough I don't know her.

I got all the management team to sign the card and gave it to my co-worker yesterday. She happily reported to me this morning that they like the card, and found it meaningful. I'd say, mission : Successful :) 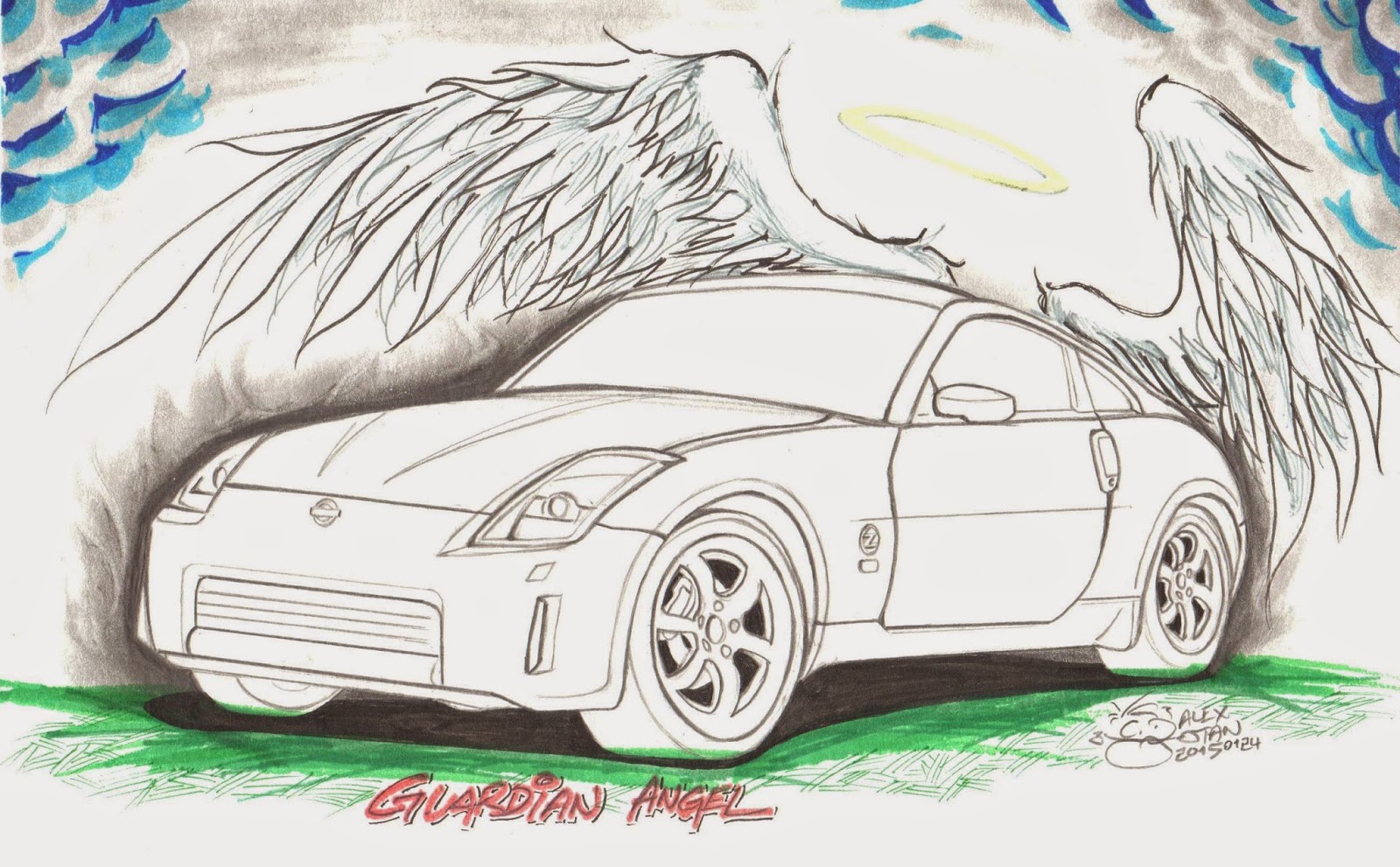 I can't believe it's been a year since my last post. At first it was just moving into this new house and trying to get settled in, and then there were many other things, gaming, work, family, friends, travels... it was just hectic. I thought of it as a year of vacation from drawing anything on my Moleskine, but I do occasionally doodle here and there.


(Update: I misspelled her name, it's actually Hollie and not Holly)
Anyway, here's a quick sketch of my co-worker's granddaughter, Hollie. I thought she has the most serene smile, and she's an angel(because she absolutely loves cats), eventhough I've never met her. 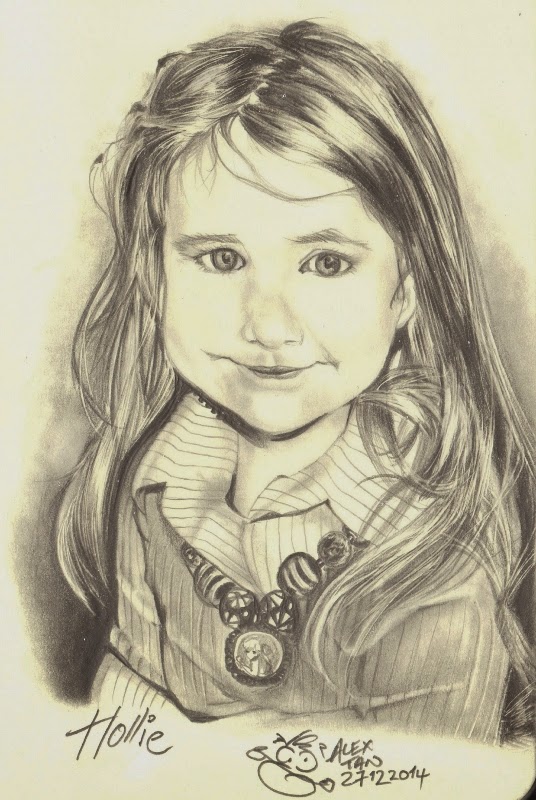 Wishing everyone a belated Merry Christmas and Happy New Year!
Posted by Alex at 1:20 PM 18 comments:

In February 2009, when this art blog was still dormant, and when I was still active in a joint-blog called Rainbowbox (which is now dormant), I sketched a new friend I had made named Carol. During that time, I was not into portraits yet, and most of my drawings were rather manga style. And then in March 2009, I started experimenting with portraits and drawing faces a little more seriously. I sketched my Carol again, and it was the 3rd time I drew portraits, and they were all in larger sizes (bigger than 8 x 5").
Now in 2013, I thought it'd be fun drawing drawing her again but in miniature sizes with different expressions :) 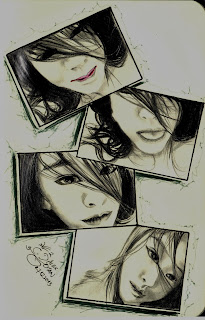 And I just realized that I've been doing portraits for more than 4½ years now.
Happy New Year!
Posted by Alex at 1:50 PM 9 comments:

A quick sketch of my wife's friend's baby daughter, Brilee. She just turned 2 not too long ago. I haven't got the chance to meet her yet, but from all the pictures her mom has shared, I can easily tell that she's super adorable and fun to play with ^^ Thank you for visiting and taking time to leave a comment. I really appreciate it!
I hope everyone's had a fantastic Christmas and spent a lot of quality time with loved ones...next up, HAPPY NEW YEAR :)
Posted by Alex at 2:43 PM 6 comments:

Alex
I love drawing ever since I was little, and I want to keep drawing, that's why this blog was started. I shift from style to style, so nothing stays constant really, but then I started doing portraits in 2009 and hopefully I won't stop doing that because I love doing it. Everything I do in art is pretty much self-taught, so they methodology could be very different from what people put on text books. All comments and criticisms are welcomed so feel free to roam around and express your thoughts. Thank you for visiting.

Link to my Deviant Art